Sunday Music: We Are The Champions 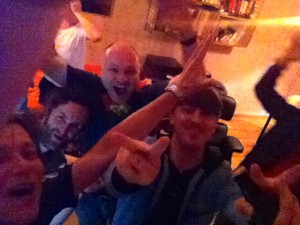 Sunday Music on a Tuesday? Yes, please excuse me, but yours truly was busy watching the Football World Cup Final last Sunday and to jump for joy after the match. I already told you a bit or two about my passion for football and my hope, that the German team might face the Dutch in the final and how I felt about Germany’s historical victory over Brazil.
Now it was a rematch of the 1990 final versus Argentina and it was truly an exciting epic match.When asked by German DJ magazine Faze Mag, I tipped for a 3-1, expecting some more German goals and anticipating at least one by Leo Messi. I was watching with some of my best friends and as you can see, our joy was unbelievable, when the final whistle blew and the result was fixed for eternity.

I was very impressed by the mixture of team spirit, technical ability and pure passion that carried the German 11 through the final and was probably best displayed by Bastian Schweinsteiger’s cut under his eye and his relentless will, not to give up. In the German press I could read a lot of glorified reports already, some of them using language which sounds very pretentious or even autocratic, which is a view I just cannot share (and will not share with you here).
Don’t expect me to fall into black-red-golden gloria here. There’s a lot of work to do in the world and in my personal life, that must be tackled NOW. Think of the conflicts in Gaza and Ukraine, where people are dying and where nobody was really watching since the Football World Cup drew all the world’s attention.
And on a personal note: I finally need to finish productions for my new microglobe label.

Nevertheless I was embracing the decency of the German team after the victory over Brazil and the willpower of Schweini during the final. When the road gets too glorious or too tough for me next time, I will remember these example.

So instead of some pathetic victory hymn I would like to post a rather silent cover version of Queen’s “We Are The Champions” by Berlin’s nostalgic vocal icon Max Raabe, who is beloved for his Twenties Berlin sound and just finds the right tone to say:
yes, I am happy, I am thankful and will remember these moments for the rest of my life.
Not only on a Sunday.

Max Raabe und Palast-Orchester We Are The Champions