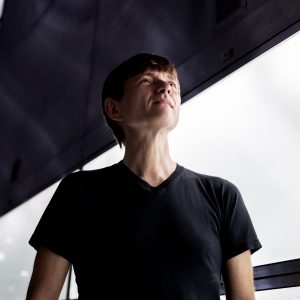 Mijk has been an influential figure in the early Berlin Techno scene from it’s very beginning, having produced many ground-breaking tracks on his own, with projects like Marmion (“Schöneberg”) or in conjunction with other DJs and producers as diverse as DJ Hell, Claude Young, Takkyu Ishino, Thomas Schuhmacher, DJ Rok, Toby Izui, Tanith, Cosmic Baby, Namito, Rummy Sharma, Rob Acid, Baby Doc and Tom Wax, to name but a few.
Mijk’s trademark sound consists of “beats for the body and sounds for the mind”.
His vision of Techno was inspired by the sound of Berlin’s clubs Tresor and E-Werk and raves like Tekknozid, Mayday and the Berlin Love Parade, also by performing at all of these.
In 1992 he joined Mark Reeder’s label MFS and together with his friend Cosmic Baby compiled and mixed “Tranceformed From Beyond”, the first compilation, that would put the style “Trance” on the map.
In 1993 the “Berlin EP” by his project Marmion in conjunction with Marcos López was released on Superstition Records. Especially the track “Schöneberg” is still considered as one of the eternal classics in House and Techno. In 2022 the website “Knights Of The Turntables” listed “Schöneberg” in its “Top 50 Electronic Records of all times” along such usual suspects as Kraftwerk, New Order and even the Beatles.

While “Schöneberg” is a fine example of Mijk’s idea of a solid groove and a highly recognisable melody, the “Schöneberg (Marmion Remix)” from 1994 stood out in his own right as a highly energetic rave track that heavily influenced the UK Hard House scene and became the secret anthem of tracks like “Trade”.
Mijk’s first album “Afreuropamericasiaustralica” from 1994 under the project name “microglobe” was a complex non-stop mixed concept work with Techno, Trance and Chill-Out elements and own lyrics about his idea of a microglobe: sharing ideas and music with people across an ever more connected planet. Almost 28 later, songs like “Environ-mentality”, “All Our Colours” or “Fear Of The Unknown” still sound as relevant as they did back then.

Mijk has toured worldwide and developed an especially strong bond with fans in Japan, where he released on major and independent labels such as Sony Music and Frogman Records and worked with key figures of the scene like Takkyu Ishino (Denki Groove) and on several PlayStation soundtracks of such iconic games as “Ghost In The Shell”, “Ridge Racer V” and “Armored Core 2 – Another Age”.
Being a practiced musician Mijk van Dijk has played live to audiences of tens of thousands, as well as jamming with music artists of different disciplines and genres. His DJ sets may often include live elements such as drum machines and effects, making each a fresh and exclusive experience.

Mijk van Dijk is also associated with the Liquid Sky Collective, a world-wide artist network around legendary Air Liquide co-founder Dr. Walker which has become home for his excursions into the deeper and less harmonic shades of electronic ambient, down beat, acid and hardcore.
Since his DJ career kicked off with presenting the radio show “House Arrest” on discontinued Rockradio B in 1992, Mijk has been hosting several radio shows through recent years like “motherfunk” and “music 4 the microglobe” on BLN.fm, “Liquid Sky Radio” on Alex Berlin and recently his live show “Fürstenberger Wohnzimmer” on evosonic radio.

Lately Mijk has released EPs and remixes for relaunched legendary Techno labels Force Inc. and djungle fever, Trapez Records and BluFin Records from Cologne and of course for his own imprint microglobe.
In 2022 Mijk is coming back strong from the pandemic with releases on young Berlin techno imprint Front Left Records, the DJ mix compilation “embark 11” with new exclusive track “Rotation” on Trapez Records and a spectacular cooperation as “Bleep Gigaverse” with
JL aka Jürgen Laarmann (editor of Frontpage magazine, Germany’s legendary Techno mag in the early 90s) on Cologne’s mainstay Kompakt Records.
And finally, Mijk will release his new album along with remixes and reworks of classic tunes from his career which now spans more than 3 decades.

Mijk van Dijk was already called Multi-Mijk by Jürgen Laarmann in a Frontpage article in the early 90s. This is even more true today than ever before.

A collection of links: