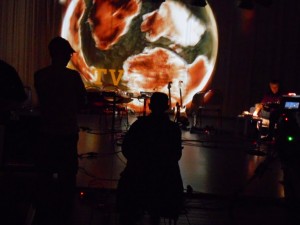 Yesterday night’s session at LSB_tv was quite amazing: the whole scale was larger, wider, bigger. We recorded in the big studio at Alex-TV and had an impressive video installation. Several acts from the Liquid Sky universe would meet and play. I had just returned from my gig at Weberknecht in Vienna and was about to play a session with LSB head honcho Dr. Walker and rbb’s own Volker Düspohl. Volker paid his return visit after Dr. Walker and I were invited to his Elektro Beats show on rbb. He brought his guitar for this session. I would play the bass (thanks to Gibson), while Dr. Walker provided the beats and additional sounds.
Other acts and musicians were Sheldon Drake, Henriko Sagert and Air Liquide’s Cem Oral aka Jammin’ Unit, who performed only with a collection of old compact cassette tapes containing his own historic recordings and effected these with all kinds of analogue hardware to a cluster of beats and noise and space. 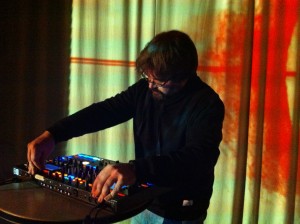 In pure contrast to Cem’s old school approach, Omsk Information played a digital Drum ‘n Bass set with Native Instruments futuristic and yet unreleased Traktor Kontrol S8 DJ performance controller. During the whole broadcast  (which was with 7 hours one hour longer as usual, due to the time shift to Central European Wintertime), the truly amazing video animation was done by Uli Sigg. Uli beamed projections on the walls and curtains of the TV studio in which the DJs, live acts and our  little trio were performing. With the additional post production it looked like a perfect mix out of 70s aesthetic and today’s super-modern virtual TV studio. While there are no recordings of the show online yet, here are already some pictures that give you an idea of the look. Once the video recordings of this LSB_tv show are online, I’ll post them here immediately. 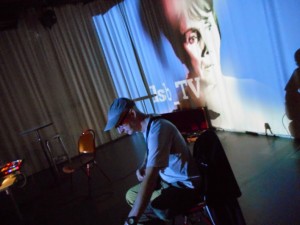 Uli hails from Cologne and has been doing video artwork for musical legends like Holger Czukay, Michael Rother and Dr. Walker and Cem Oral’s act Air Liquide. And when performing, not only our music but also the graphics reminded me a lot of German Krautrock band performances from the 70s. Jamming over a loop, developing slowly evolving repetitive musical patterns, this is what bands like NEU! and Harmonia were all about.
So here’s my Sunday Music feature for today: the album Tracks And Traces by Harmonia ’76, the cooperative album project by Harmonia and Brian Eno. This music has been recorded 38 years ago and it sounds amazingly fresh still today. Listen to “Sometimes in Autumn” or “Weird Dream” and you maybe get what I mean. I post this Spotify playlist because I could not find the album on YouTube or anywhere else.

Looking for Hallo Gallo, the NEU! classic from their self-titled album, I found a blocked video on YouTube. I post the link anyway, since some of you might be able to watch it and I really liked the explanation of the genre Krautrock provided by a66mo45.

“Krautrock (Kosmische Musik, Kraut, or Krautwave) is a generic name assigned to the experimental bands in Germany in the late 1960s and early 1970s. It was originally a term used pejoratively by the British music press, and is believed to have been created by it from the popular expression Kraut, meaning a German person and in turn derived from the traditional German dish sauerkraut, sauerkraut (literally “sour cabbage”). However, because of the very success of these bands, the term later gained a positive meaning and is currently seen as a title of recognition rather than insult.
Krautrock bands typically defined as the beginning of 1970 are Tangerine Dream, Faust, Can and Amon Düül II, in addition to associated with producer Conny Plank, as Neu!, Kraftwerk and Kluster. These bands manifested a reaction to the cultural vacuum in Germany after World War II and generally rejected the Anglo-American culture in favor of a definition, more radical and experimental, what would be the new German culture.
The krautrock, in musical terms, can be considered a synthesis of influences that travel between the psychedelia of names like Pink Floyd (in its initial phase), La Monte Young and the Velvet Underground and scholarly vanguards of the twentieth century (concrete and electroacoustic music) , also including passages by minimalism, the atonality and the free jazz. It is characterized by an obsessive taste for dissonance, noise, sound collages, improvisation and rhythm, often worrying more than timbre with the melody.
Genres such as post-punk (Pere Ubu, The Fall, Joy Division and P.I.L.), industrial music (Einstürzende Neubauten), alternative rock (Sonic Youth), electronic (Gary Numan, Throbbing Gristle and Cabaret Voltaire) or even the sound of bands as Mouse On Mars and Stereolab krautrock had some inspiration in.
A frequent error is the classification of the entire German rock scene of the 70s with the use of the name krautrock: it is almost normal to find articles that deal with the term as a kind of “bottomless pit” and ending by bands include German as hard Lucifer’s Friend and Eloy in this category, which is a big mistake. Traditionally, krautrock is synonymous with breaking the paradigm “to see how fast we can play,” replacing it with “see how far we can go.” The use of creativity over speed is emphasized by the frequent use of so-called motorik, that is beats in 4/4 time bands used much of the time.
Although the term Kosmische Musik has been used to designate bands that was understood (at the time) as the progressive rock of Germany, is now used with a synonym for the Krautrock.”
Source: a66mo45