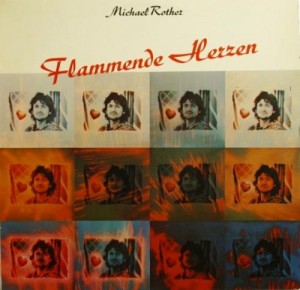 Just recently I received a promo of a new compilation called “ELECTRI_CITY – ELEKTRONISCHE_MUSIK_AUS_DÜSSELDORF” full of old gems by Düsseldorf based bands from the 70s and 80s like Der Plan, La Düsseldorf, Harmonia, DAF, NEU!, Die Krupps, Liasons Dangereuses and more, to be released soon on Grönland Records.
Also on this compilation is a track by Michael Rother, Michael used to be a founding member of Kraftwerk and played in several very influential bands like the forementioned NEU! and Harmonia.
The biggest impression on me however made his first solo album Flammende Herzen from 1977. As a school kid I would discover a lot of new music in the Mediathek of our local library, where you could listen to and even borrow and take home vinyl records and compact cassettes. The library collection had a great impact on the development of my musical taste, since it was there, where I first discovered music off the beaten track/ radio.
Like a lot of so-called German Krautrock, which wasn’t really big on German radio in those days.
I was especially impressed by the beautiful strange and harmonic sounds of Flammende Herzen and tried to play the title song on my acoustic guitar, wondering, how I could make it sound like Michael Rother.
And almost exactly one year ago I finally had the chance to play with Michael Rother live on the Telepathic Bubblebath Open Air Jam in Berlin along with my friends Harald Blüchel aka Cosmic Baby, Dr. Walker, Omsk Information as well as FM Einheit, Cem Oral and many others.What an amazing experience to jam with one of the musicians that really broadened my musical mind, when I was a young kid looking for guidance. Read my review on this amazing festival >>HERE<<.

This is a YouTube version of Michael Rother’s also great second solo-album Sterntaler.

And while you are at it: here’s more exciting old music from Düsseldorf for you.
[soundcloud url=”https://api.soundcloud.com/playlists/41336299″ params=”auto_play=false&hide_related=false&show_comments=true&show_user=true&show_reposts=false&visual=true” width=”100%” height=”450″ iframe=”true” /]