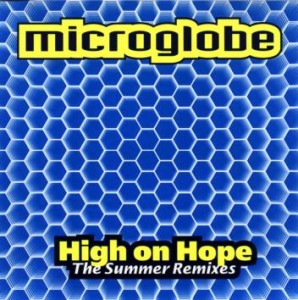 Now this was summer 2014. I hope you enjoyed it as much as I did. Especially the last week was a nice payback for some unnecessary cold and rain before.
22 years ago around this time, I was waiting for the release of the Summer Remix EP of my Microglobe track High On Hope. And I just found this interview on my computer, that I gave to I don’t know who a couple of years ago about the making of the Long Hot Summer remix.So this episode of Sunday Music is more like a background interview about one of my early works than a musical suggestion for your Sunday. However, I’m high on hope that you will find this entertaining as well. 😉

Why did you call it High on Hope (Long Hot Summer Remix)?

The track was a remix of the original High On Hope  track which was released as MFS 7019 in 1992.
I did the original track in 1991. The beautiful hook melody that is featured heavily on the Long Hot Summer Remix appeared only at the very end of the original track.
Before that I had only done harder techno productions and that was the spirit in Berlin in 1991: harder and faster.
Maybe I shied away from using that melody too much at first.
However many people encouraged me to put it in the focus of a remix and that was the intention of the Long Hot Summer Mix.

How old where you when you made it?

What was some of the instruments and equipment you used?

It was mixed on a Roland 24-channel mixer with a simple 3-band-EQ.
I had a cheap Alesis compressor in the master bus.
Sequencing was done by an Atari 1040ST with Cubase.
I worked a lot with samples in those days, most drums also came from the sampler which was a Yamaha TX16W, best RAM value for the buck in those days.

Do you remember how long it took to be mixed and mastered?

I was working on several mixes at the same time and it took a while, maybe 2 weeks. I was still a student in those days and could only work on my music in the night time and on the weekend.
Mastering was done by Wolfgang Ragwitz in the mastering studios of MFS on one afternoon.

Can you remember what studio it was mixed at?

In my studio that I shared with my friend Johannes Talirz.
It was basically a collection of second hand gear that we bought whenever we could afford a new item. Very homerecording standard.

What was the keyboard you used in this track?

I don’t remember anymore, which other synths were used on that particular track.
But other gear I used a lot on those days were a Yamaha TX81Z, Roland D-110 and my faithful Roland Juno-106. I still have these synths today.
The track was recorded directly on 2-track DAT, that’s why there are of course no stems or audio files of individual tracks.

Obviously the bassline is a Roland TB-303 which was muted and modulated live during the mixdown. I had to mixdown many times until I had finally recorded a version that did not clip and where the 303 felt right.

Can you remember how many copies were pressed?

No idea, sorry. It was financially not so successful at the time though, because the first promos were already out for Loveparade 1992. However in summer 1992 MFS switched their distributor, but were still in a contract with their old distributor. So they could not release 12″-singles in 1992, only so called “Mini-Albums” which had a higher price.
When the High On Hope Summer Remixes came out in fall 1992 as a mini album with a higher price than an ordinary 12″ single, the track was already “Old” since it was played heavily by the key DJs in Berlin and elsewhere all summer. And it was more expensive than a norma 12″.

Anything special or unusual about the track that is not widely known?

The MDML-version was my first collaboration with Marcos López. We studied together in those days and he asked me for 2 copies of the original High In Hope track, so that he could lengthen the “happy melody” part by juggling the records (no Traktor loop function in those days yet… ;-).
So I invited him to do a remix together, which was fun and felt good.
Soon after that we would start working on the first Marmion tracks which finally resulted in our hit “Schöneberg”.
Another version of High On Hope that I dearly love is included on the Tranceformed From Beyond compilation. I think I did over a dozen remixes of that track, which all resulted in totally different versions. Only a few of them were released.
There is a “High On Hope Reprise” on the end of my Microglobe album Afreuropamericasiaustralca.

Did this track reflect how you felt at the time you made it? I mean it sounds like a really good happy uplifting tune that makes me want to dance every time I hear it, you could even say its almost like you were high on hope when you made it!

Most definitely. I was in a very happy and hopeful mood in the early 90s.
The wall had fallen down in late 1989 which triggered the development of the techno scene in Berlin a lot. We had the most amazing parties everywhere the vibe was ever so strong. We all felt like one big family.
And since 1992 I could live my dream: to make music and make a living out of it.
The summer 1992 itself was long and hot and the title of that remix is also a reminiscence to the Style Council song Long Hot Summer  that I love very much.

How much control did you have over how you wanted it arranged and mixed?

I mixed it alone in my studio. Even the vocal version was recorded at my studio. The vocalist is Hanin Elias of Atari Teenage Riot. Alec Empire and I would often meet in those early days to make DAT backup copies since each of us only owned one DAT recorder. In order to backup or make production copies for the labels, we would connect our DAT recorders.
The idea to make a vocal version came a bit after I already had recorded all the other mixes. It was included in the last minute and due to that the vocal version does not appear on the artwork of the CD properly. It’s not on the vinyl, since that was already cut when I finished the vocal version.
Since I did not have a multitrack recorder we recorded Hanin’s vocals in the most simple way. She would sing into my cheap microphone, I would record her on DAT and later sample her best bits and fly them in from the sampler. When I think about those production techniques now, I am still amazed how many possibilities we have now with our modern technology.