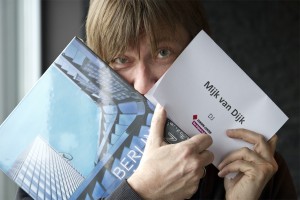 Yesterday I was invited to take part in a press conference on the presentation of Berlins Weg in die Wolken, a new book by Hagen Liebing about the Europa Center building in the West of Berlin, which was erected in 1963. Several contemporary witnesses like the architect of the building Ivan Krusnik, the post man Wolfgang Giese-Miezal, comedian Hans Werner Olm, rbb reporter Ulli Zelle, author Ulrike Sterblich and yours truly where talking about the building and it’s significance through the decades.

Of course I was supposed to report about the 90s and the first Loveparades, that led past the Europa Center over Tauentzien and Kurfüstendamm, which I gladly did. 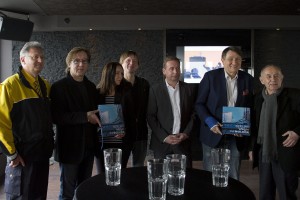 I also mentioned that I used to live just a few blocks away from that building and always saw that turning iconic Merces star on top of Europa Center from my rooftop terrace. And that the Europa Center was always the major landmark of the down town of old Westberlin, an aera which is now slowly coming back into focus again.

I even mentioned, that the Loveparade and our techno movement endorsed the image of the new young and reunited Berlin much better and stronger than any official marketing campaign could have done, like the campaign to bring the Olympic Games 2000 to Berlin. This campaign cost millions of Deutschmarks and failed horribly.
Now that Berlin is again applying for Olympic Games, we should reconsider, what’s really good for the city and it’s citizens and the image of Berlin in the world.
Here’s a press review in German from Die Welt.
They did NOT mention my slightly critical words on the Berlin Olympic campaign. 😉 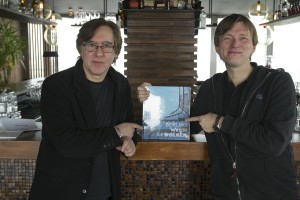 On a not so serious tip: the author Hagen Liebing used to be bass player for German superstar Punk-Pop band Die Ärzte during the late 80s. So here’s a pic of two bass players and a great book that would sit nicely on your coffee table. 😉
Photos: Ellen Dosch