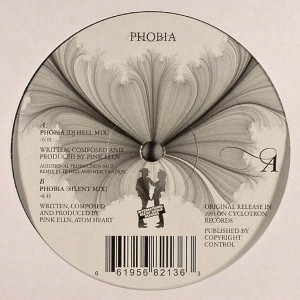 When I was working with DJ Hell on several common productions in 2007, I suddenly heard bells in my mind. This happens quite often in totally different situations: suddenly a sound or a melody strikes my mind like a comet and I wonder where I know this from.
Those heavy dark bells would not leave my mind until I finally remembered a few days later, where I knew this from: André Fischer aka ADSX, with whom I am connected until now through our Liquid Sky Berlin family gave me some promos of Laiki Kostis’ label Cyclotron back in 1991. One of them was a white label with a dark ambient tune. There was “Phobia” written on the white label and the voice on that tune pleaded in a bittersweet voice “Silence! Let me have silence!”
I always used to love that tune, started sets in the 90s with it and always found it hard to mix the next record into that track. I decided to create a beat edit in Ableton, where the beat would come in just where I want it, to make it easier to mix. I played that edit to Hell and he loved it immediately. Hell wouldn’t be Hell, if he would not think of how to work with this discovery in a creative way. So he contacted Pink Elln, the original producer of that track to receive clearance for a release of the 1991 original and a 2007 DJ Hell-Remix on Gigolo Recordings. Credits on Discogs. We produced this remix in my Deerpark Studio, which was situated next to the St.Matthias cemetery in Schöneberg. I was working there during the second half of the 00s.
We wanted to create a remix, that felt like an extended Old School trip but preserve the sublime sonic feel of the original. So we opted for that deep and moving Bobby Konders House bassline and a typical arpeggio sequence. We also sneaked in other sounds that we both love, like those pitch-bended Derrick May-like strings.
I also love the artwork of the cover, it reminds me of night moth.
Listening to this, I think I should start a set with this track once again.