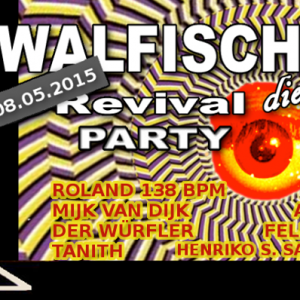 The Walfisch club was the first after hour institution in Berlin. Located just at the exit of U-Bahn station Heinrich-Heine-Strasse it was in session from 1991 to 1993 (or so) as the first Afterhour club in Berlin.

It would only open by 10:00h on Sunday morning and party people and DJs would come from the other clubs when these closed to celebrate further.
Walfisch would get really crowded from noon and peaktime was about 16:00h in the afternoon, slowly fading at 21:00h until midnight, although some parties went much longer into Monday.
On Sunday afternoon all the other DJs who had played at Tresor, Planet, Praxis Dr. McCoy, Bunker or elsewhere would come with their record crates and place them next to the DJ booth, to wait for their 1 hour slot to play.
I spend hours and hours at Walfisch talking and dancing, often I did not go out on Saturday and would come to Walfisch fresh after breakfast to meet the other creatures of the night that had been raving since Friday already.
The music was a good mix out of Techno, Trance and early 90s House, not too academic with an easy and accessible twist to keep the crowd going after a long party weekend.
Tanith wrote a good report about Walfisch on his website.
Walfisch was situated in what later became the Sage Club and finally the KitKat Club at the junction of Heinrich-Heine-Strasse/ Köpenicker Strasse. And in those very rooms the Walfisch Revival Party is now happening since a couple of years.
Yesterday the organizers Steffi & Jay celebrated their 10th installment and besides me had invited an impressive line up of Berlin Old School legends: Roland BPM, Tanith, Der Würfler, they all have been indispensable DJs for the 90s Berlin techno scene.
It was a wonderful night full of flashbacks to a time 25 years ago. I’ve had already played the Walfisch Revival party on March 14th 2014 and my recorded set quickly became my most popular set on Mixcloud. In order to narrate further I picked only tracks, I did not play in 2014. And when I play Old School, I play those faithful vinyls and resist to complain about missing digital DJ standards like loops and tings (oopsi)…..
So here’s yesternight’s set on Mixcloud and some video impressions, I hope you enjoy it all as much as I do.