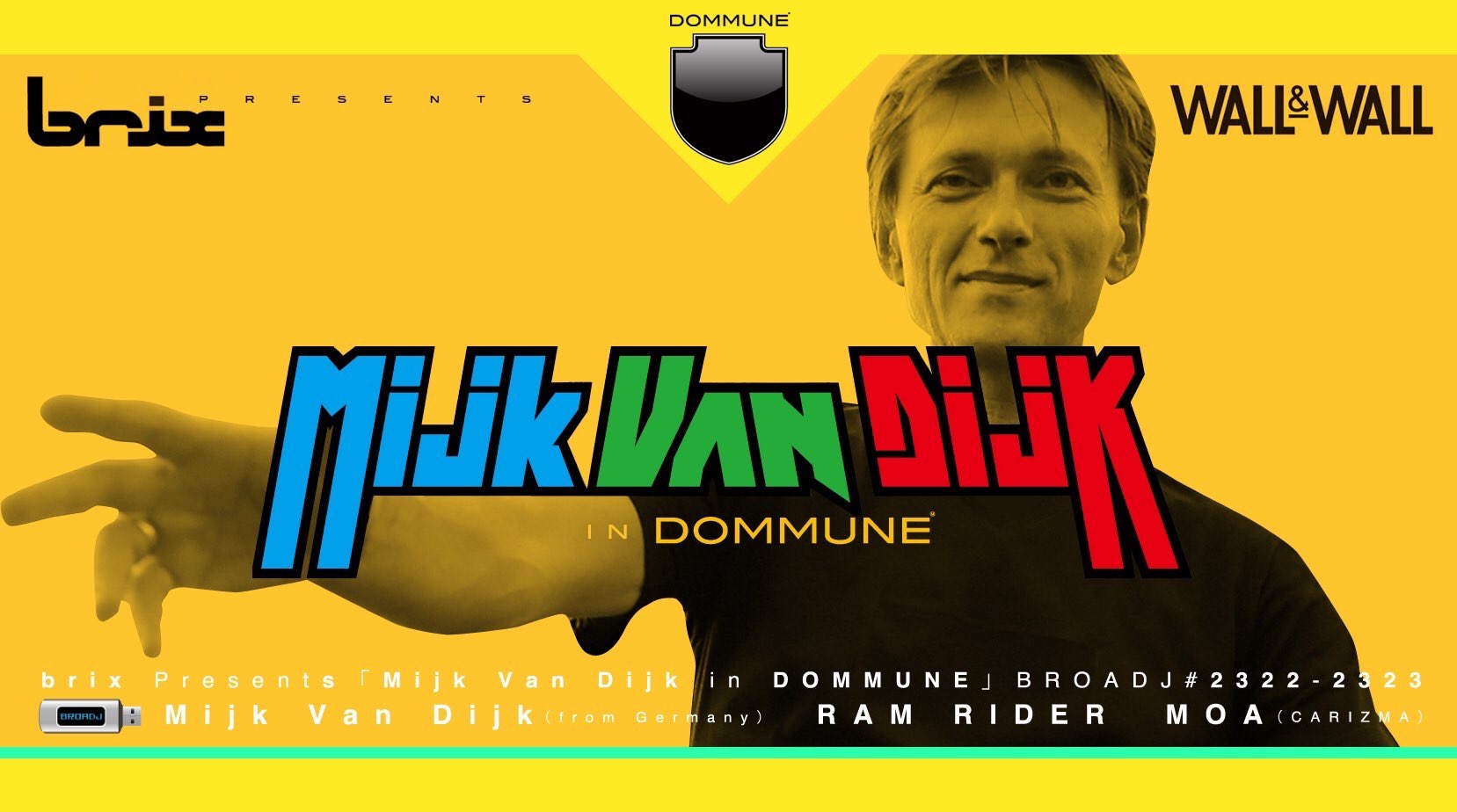 Domo arigato-gozaimasu to all my friends and fans in Japan, who made my 29th tour to Japan like another dream come true. This time it were short and sweet 8 days with 5 performances and a lot of other things to make and do. 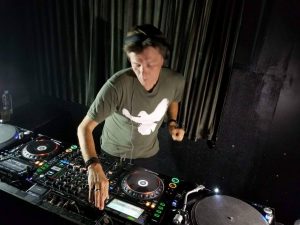 Day 1  On the day of my arrival I already played with Ram Rider and MOA at DOMMUNE, the famous DJ internet TV. Always so great to be part of Ukawa-san’s “final media”. By playing favourite new Techno tracks and my latest own productions I set the tone for my forthcoming gigs in Nippon.
On Day 2 I would go crate-digging in second-hand-record-shops in Shibuya for Japanese Disco-Funk vinyl albums of the 80s by the likes of Tatsuro Yamashita, Minako Yoshida, Taeko Ohnuki and Hitomi Tohyama, to name but a few. A new quest for me, looking for shops and things, I have never been looking before, asking friends for advice and following their hints. Exciting! 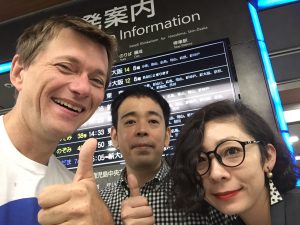 Day 3 saw me jump on the Shinkansen for my first club gig all the way down south at Kieth Flack in Fukuoka, hosted by my friend Tomoya Matsubara aka Reqterdrumer. I’ve had already two remix releases on his label Blue Arts Music and got to test-play my musical contribution to the next Blue Arts Music compilation which will be out in 2018. Besides DJ Tomoya there were also Sugiurumn, who presented his new album “AI am a boy.” on his label Bass Works Recordings and Poker Flat recording artist Iori Wakasa, who played pumpin’ House music. Sounds great? Yes, it was! 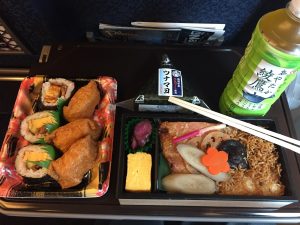 Day 4 I had to get up early to catch my Shinkansen to Osaka, because there was a tropical cyclone on it’s way from the South to Japan. I was supposed to play in a bar located in the legendary Misono building, a former cabaret space, the biggest in Japan. I was greeted by the crew all wearing yellow “mijkamania”-T-shirts and that was just the beginning of a wild evening. I had never played in such a small space before, crammed with hardcore fans, so I decided to play only my own tracks, new and old. 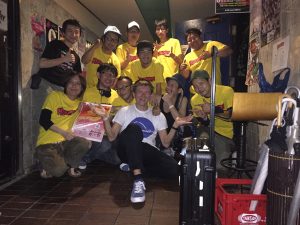 Good decision: they knew almost every song and every mix was cheered big time. A night to remember!
Day 5 once again started with bento box breakfast on the Shinkansen bound for Tokyo for the final club gig of this short tour. I took the chance to visit my brother-in-raw Toby Izui at his Easy Sunday Party at ZuBar for first drinks and talks. In the meantime the cyclone had been following me since three days and finally hit Tokyo a few hours after my arrival. Due to the heavy rainfall the night at club Wall&Wall/ Vent started slowly b 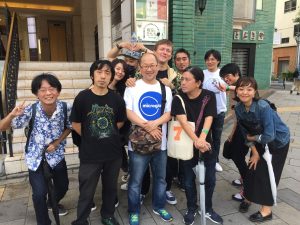 ut would rise in intensity the more people came in from the rain. The fantastic club sound system supported the sets by Siegzeon, MOA, Takami and Ram Rider so well, I was simply blown away by the fat and direct bass in that place. The grand ending was a final B2B by all DJs. Later the remaining DJs and friends would go for morning sushi at Sushizanmai, an infamous 24-hour sushi parlour at Shibuya station. No better way to end the day.
Day 6 was finally total chill-out, visiting friends for private dinner in the cute  Sangen-yaya neighbourhood. 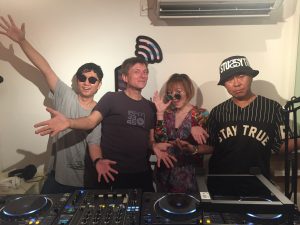 Day 7 marked my last DJ event, a set at Block.fm radio for the show hosted by my friend Venus, who is a writer for J-Pop lyrics and proud owner of Oiran Bar in the heart of Shibuya. I played a 45-minute set only of my latest tracks and remixes and you can check it out on Friday September 29th >>right here<< live at 20:00h Japan time or 13:00h central European time. Or after that on my Mixcloud. After recording the show it was again crate-digging time, now in Shinjuku. By the help of Discogs, YouTube and my friend Robert Palmer, an expat living in Tokyo, I found more fantastic Japanese 80s Pop gems on vinyl. 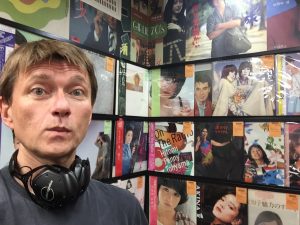 Day 8 saw me get up early heading for Ochanomizu, looking for final additions for my growing collection of Japanese 80s Funk/Jazz-Pop. Not so lucky this time, but I shall continue my quest next time. Guitar players should definitely check out that neighbourhood around Ochanomizu station: it is full of guitar and bass shops.
Me however was heading for synthesiser heaven by paying a visit to Five-G store in Harajuku and doing an interview with shop owner Kiyotsugu Suzuki for German musician’s web portal Bonedo. For those who don’t know: Five-G is pure synthesiser heaven with all the hardware, that most people only know as software plugins in their DAW. And all units are all in mint or near-mit condition and for sale – when there is no “reserved”-tag on them. Another regular must-go was Power DJs in Ikebukuro, to check out the latest DJ gear from Japan that has not arrived in Europe yet. 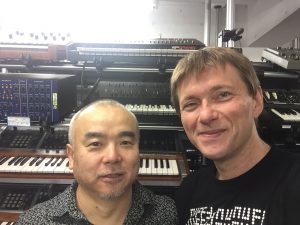 To finish off my last day of this Japan tour I visited the Native Sessions event by Native Instruments Japan at Club Contact. Great club located in a parking lot in the middle of Shibuya.
After that one last visit to Oiran and then back to the hotel, for packing and an early morning ride to Narita airport after much too less sleep.
F 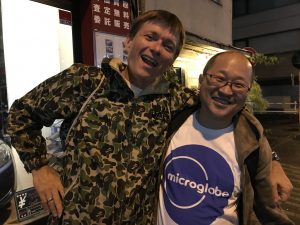 inal hint: if you want to travel Japan, get that Japan Rail Pass, which entitles tourists to take most any train and even the JR lines in Tokyo at no additional cost. It’s mijk-approved! 😉