Me And My Roland 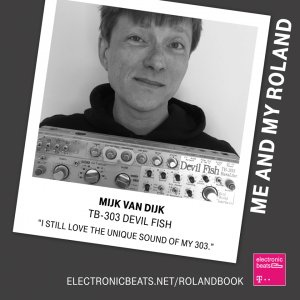 Electronic Beats is about to release a book about the classic Roland synthesizers, drum machines and effects. The book is a tribute to the golden age of Roland Instruments that changed the ways of electronic music as well as to Mr. Ikutaro Kakehashi himself, the founder of Roland.

While the company walked on somewhat mysterious ways during the late 90s and 00s, almost neglecting it’s glorious past while the whole world deified it’s classic machines, now Roland is back on track again with their AIRA range, that successfully reanimates the glory of the XOX range (e.g. 101, 202, 303, 505, 606, 707, 808 and 909). While there is no better than Jeff Mills to praise the TR-909 in the book, the Egyptian Lover reporting on the TR-808, Mathew Jonson on the SH-101, and of course Lee “Scratch” Perry on the Space Echo, Electronic Beats also asked other producers for a photo with their favourite Roland machine.
In my case this has to be my Roland TB-303 with the Devil Fish modification.
I originally bought it in 1991 together with a TR-606 drum machine and a KMS-30 synchronizer for DM 300,-
Yes, three-hundred Deutschmarks, the equivalent to 150 Euro. Everybody wanted MIDI and digital sounds back then and the 303 seemed like an inferior machine to most musicians.
Not for me: this 303 has travelled the world and seen many a live stage, has been used on many of my productions, proudly starting with High On Hope and even the bass sound on 3phase feat. Dr. Motte’s Der Klang der Familie is a sample of my very own TB-303.
You may also have  seen it in the famous Techno City Berlin 1993 documentation.
So why the Devil Fish modification?
After several gigs it was very dirty and my then girlfriend wanted to clean it – with nail polish remover.
The first thing she wiped off was – the Roland lettering.
Aaaaaarghhhh!!!!!!!
That was also shortly before a tour to Australia in 1996 which also would bring me to Melbourne.
There had been a lot of talk about the famous Devil Fish mod in the Techno Scene, hardly any of us had seen one back then and since the internet was yet very slow, there was only little information about it.
But I found out that it’s maker Robin Whittle resided in Melbourne, so I brought my optically wasted 303 to him so that he could build in the mod. We decided to place all the switches for the increased sequence memory where the Roland lettering used to be. And while discussing the mod I inspired him to build in a red button that would allow to manually punch between the A+B versions of a sequence in order to manipulate the sequence itself.
The Devil Fish mod unlocks some more of the great sound potential of the 303.
But while an ordinary 303 sounds great in basically every position of it’s parameter knobs, a Devil Fish 303 is more delicate to use and modulate.
I recently used my Devil Fish 303 on my  remix of Superstrobe‘s forthcoming single The Future and I’m still in love with it.

Microglobe – High On Hope (Twisted Version) is probably the first recording that I ever used my TB-303 on (not yet Devil Fish modded).

I’m also a fan of the new AIRA series, especially the TR-8, that I use in all of my last production and sometimes even live in my DJ sets. Here’s a little jam, that my friend Ralph Ballschuh recorded at this years’s Musikmesse in Frankfurt.
More coverage on my highlights at Musikmesse 2015 on my Facebook page.