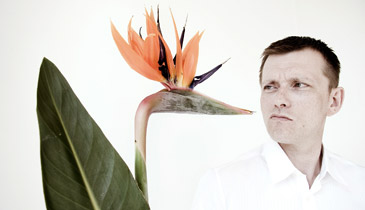 Dutch Web Magazine Laptoprockers did an interview with Mijk about his production work and current projects. In English language.

Mijk van Dijk, who has been on the forefront of the Electronic Dance Music scene since the very beginning, talks about humans with 10 fat fingers.

From 1990, Mijk van Dijk has been acting on the forefront of the electronic dance music scene. He started out as a producer of hard Techno records, later in 1992 he paved the way for more melodic Techno and Trance.

At the Start-ab-Remix-Contest last October he remixed a track by English shooting-star artist Sandi Thom in 48 hours together with other VIP-remixers including Chris Liebing, Marc O’Tool vs. Criss Source and Kaizer Souzai.

Mijk’s discography is as impressive as long and he seems to be fond of technology helping him create his music as he’s a big fan of Ableton Live …. and Sony’s Playstation Portable too! Let’s find out more about this remarkable man from Germany.

You have been around since the very beginning of Electronic Music. How did you experience the change in the way you work in the studio over the years?

“For me it was a giant leap from Stone Age to Rocket Age when I replaced my Dual 1 G4 Powermac with a QuaD 2.5 Ghz G5 Powermac. Unbelievable! Suddenly everything was possible which was only a dream before. Now I am doing the whole production in the computer. I mix over a Yamaha 01x and go digitally in certain outboard equipment, before I route back the signal digitally into my computer. I still use a lot of Hardware, but it has got to be unique, like the old Nordlead 1 or even older stuff like Roland SH-101, Juno 106 or TB-303. However I usually record the hardware synths to audio at a certain point of the production to be able to mess around with the audio signal in a more detailed way.

“I still have a lot of hardware that I really do not touch anymore, like rack synth expanders. Again we experience, that really unique things (like special electronic instruments) will stay forever and the not-so-unique sound boxes are gonna be abandoned on the cemetery of history.”

You were one of the first to work with the Ableton Live software. Have you used more software like that before? What’s your first reaction and how do you use it now?

“I first used it for my work on “Decade – The Mix“, a kind of Bastard-Pop-Mash-Up-mix-CD. I mixed over 70 sound snippets of the whole back catalogue of Superstition Records into a 74 minutes mix of constant music, layering beats and basslines, sythns and vocals, to create new music with existing elements rather than beat-mixing 2 tracks into each other. This could have never been done without Ableton Live and I discovered the whole potential of the application and fell in love with its handling and possibilities. Now, with the latest version including MIDI, I have not many more things to ask for.”

You scored music for several video games. One of them is the soundtrack of the legendary manga movie “Ghost in the Shell“. The movie is about “Cyberpunks” and “Ghosthacking”, breaking into and taking control of human minds.  What will the future bring for producers when it comes to technology you think?

“Now we finally have software plug-ins that sound well and we have the CPU speed to really take advantage of them. Next step must be the interactivity of the human and the computer. I guess that the devices for music production will become smaller and smaller. Focus is on the User Interface. In a couple of years a mobile phone might have a powerful CPU like today’s most advanced computers.

“But you don’t want to produce music with such a small device. I hate writing text messages with this small keyboard of a cell phone. I guess that the controller interfaces will still emulate “real” synths and knobs for a long time.

“Soon we will have controllers which set up automatically in a similar manner like the JazzMutant Lemur, which will allow direct feedback between controller and application. As computers become faster and smaller, we still remain humans with 10 fat fingers!”

Since you mention to expect “new controllers” to take things to a new level we assume you also use Ableton on stage for your live shows. Which controller(s) are you using for what purpose and which one is your favorite?

“Actually I use Ableton Live mainly as a production sequencer and rely on hardware sequencers on stage. I just don’t like laptop live acts that seem to write e-mails on stage rather than perform live music. I use a Yamaha RS7000 which gives me a lot of knobs to twiddle and buttons to hit on. If I use Ableton Live along with it, I make sure to put the laptop aside and remote control Live with the controls of the RS7000.”

Recent collaborations include a production with Berlin DJ-legend Rok and a remix project with DJ Hell.

A 12″ with two new Mijk van Dijk tracks will be released on BluFin-Records one of these days.