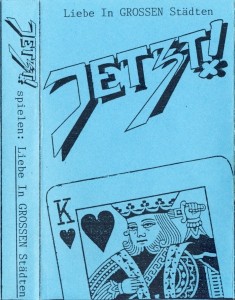 — It’s kinda strange when you find your very first demotape from 1987 with a paper cover produced at the copy shop priced with € 75,- on Discogs.
This analog music cassette contained 5 songs with German lyrics recorded with my band JETZT! in 1987.

JETZT! translates “NOW!” and our goal was to bring back good and meaningful German lyrics, a few years after the NDW (Neue Deutsche Welle) had collapsed and lyrics by German bands very either dork or in English.
JETZT! understood themselves as part of a label collective called Fast Weltweit which was established in Bad Salzuflen by youth friends Bernd Begemann and Michael Girke. While Bernd moved to Hamburg and established the band Die Antwort (not to be confused with South-African Die Antwoord), Michael Girke would move to Westberlin and establish JETZT! with several band casts. I was playing the bass in the last cast with drummer Oliver Mills and singer/ songwriter/ guitar player Michael Girke.
Michael and I were living in the same house in Kreuzberg 36, so we spend a lot of time listening and discussing music, literature and life in general. We loved bands like The Smiths, The Style Council, John Lennon, Franz Kafka, Bertold Brecht and were always on the hunt for that “good pop song”. I guess you could have called our music “Northern Soul with German lyrics” but we were far from promoting us like that. 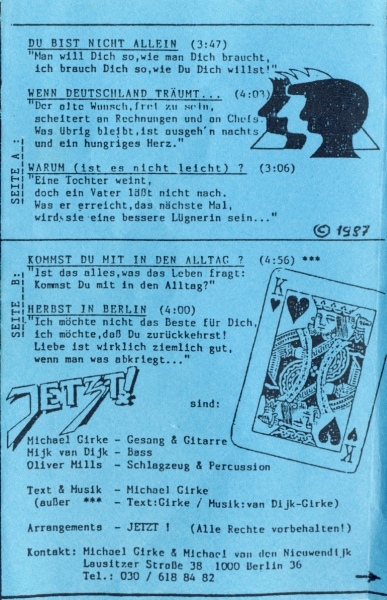 We played several gigs in Berlin, but this demo was the only recording of our band. It was recorded by Frank Werner in his studio in Bad Salzuflen, who was the recording mastermind of Fast Weltweit: all the recordings of Fast Weltweit acts were done in his studio. It was also my first studio recording experience, recording each instruments seperately and building the mix from there. On songs like Herbst in Berlin and Kommst Du mit in den Alltag? (translates roughly: “Will you come with me into every everyday life?”) we had choir support by then Fast Weltweit rookies Bernadette Hengst and Jochen Distelmeyer, who also played the trumpet. Distelmeyer covered this song 12 years later with his band Blumfeld on their Old Nobody album.

My most memorable gig with JETZT! was probably the Fast Weltweit label showcase for the BID (Berlin Independence Days) festival at Café Swing at Nollendorfplatz in Berlin-Schöneberg (now an American Burger Dinner).
Since Frank Spilker‘s band Die Sterne and Jochen Distelmeyer’s band Die Bienenjäger did not have a bass player then, I had to fill in as a bass player for their bands as well. Drummer in both bands at that time was Mirko Breder. This concert was also on the day of my birthday.

My little excursion into the  Fast Weltweit universe wouldn’t be complete without mentioning fellow bands like The Time Twisters and Der Fremde aka Achim Knorr, who is now performing as a comedian as well as TThomthom Geigenschrey, music journalist, violinist, manager of Michael Girke and deep believer in the mission of Fast Weltweit to reintroduce crucial German lyrics in the German music scene.

While playing with JETZT! I got more and more interested in electronic dance music and already experimented with a Roland TR-505 drum machine and a Yamaha CX5-M music computer. I don’t know exactly anymore, when I left the band, it must have been in the winter 1988/89. Oliver Mills also left to play with a Canadian expat band called Mavenpost and that was the end of JETZT! as a band. Michael Girke recorded a few more songs on his own and I recorded a few songs with Bernd Begemann some years later, which have not been released yet, as far as I know. 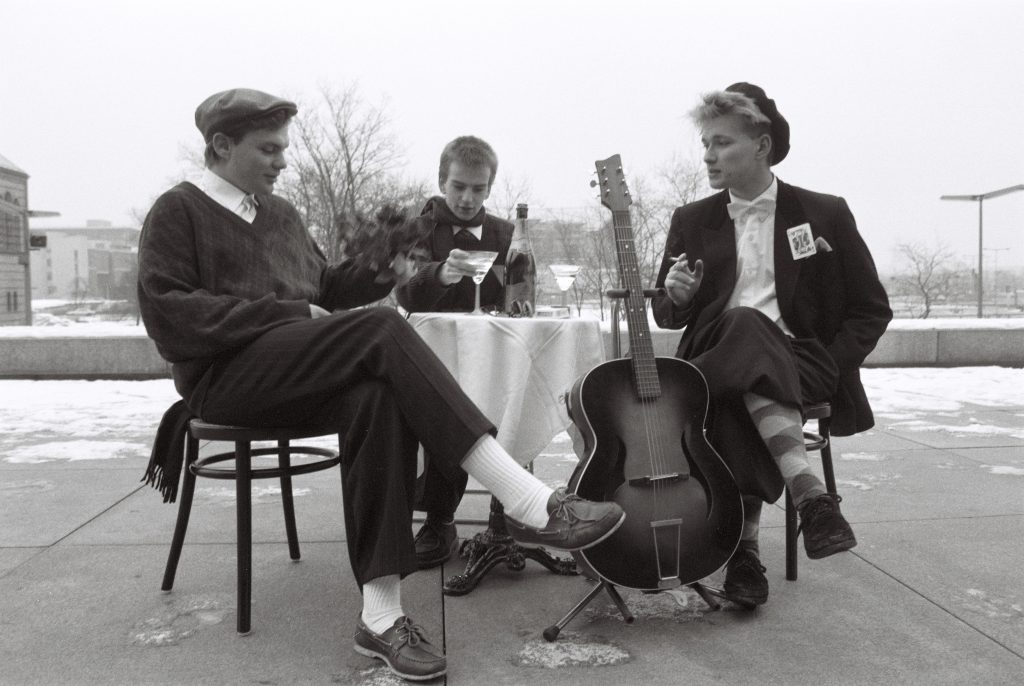