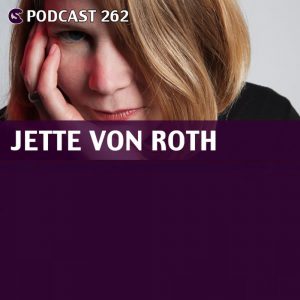 Did you ever want to know, what Jette listens to at home?
Where she draws her inspiration from?
Then this is for you: a podcast mixtape by Jette with some of her favourite music.

And she also shares more insight in the exclusive interview.
>> This is the original article and page on Clubbing.spain.<<
You can listen to the mix also on our Soundcloud page. Enjoy!
BTW: the nice “ice monster” picture is a photo by our dear friend Niklas Mascher.

If you feel your Spanish is not good enough to read it, here is the original interview in English:

Interview with Jette von Roth by clubbing.spain
1. Hi Jette, we hope this find you well. Tell us a bit about the mix you sent us, why an ambient mix?

Jette von Roth: This mix is a selection of music that I like to listen to at home and that inspires me.

2. You have been known as a vocalist, and you have included a Kate Bush’s track on the mix, was she an influence on your career?

JvR: Kate Bush’s first album „The Kick Inside“ from 1978 was also the very first album that I bought in the middle of the 80s on cassette as a child. I listened to that album over and over again and also tried to sing along with it, although I did not understand the English lyrics. I made up my own fantasy language to sing along. Since I was shy, I never sang loudly. I guess I still could sing the whole album now.
I still love Kate’s recent albums „Aerial“ and „50 Words For Snow“. I guess she is my favourite singer.

3. You have also included in the mix other well known vocalists such us Alison Goldfrapp or Beth Gibbons? What do you think of them? Is there any other vocalists (in the electronic music field) you would like to highlight?

JvR: Beth Gibbons is also a genius. She seems to be a very cool character, wether she is recording with Portishead or solo. Beth, Alison and Kate all represent a singing style that I prefer over the usual exagerrated vocalists.
I also love everything by Róisín Murphy and some Tori Amos from the 90s.

4. Tell us about Kaycee. ¿How did you three met? ¿Are you still in touch with Oliver and Stephan? Why the project stopped?

JvR: We met in Bremen, where we all lived in the 90s. After one album and some successful concerts it was time for Oliver and Stephan to move on and concentrate on insrumental electronic club music and their respective solo careers which turned out to be very successful. At the same time I was invited by Christopher von Deylen to join Schiller.

5. What about working with Schiller, you have been collaborating with him for more than a decade. Any future plans with him?

JvR: I joined Schiller as one of many guest singers for two albums and two wonderful tours. So far there are no plans for a future collaboration.

6. Nowadays you are sharing a project with Mijk Van Dijk, a glow. Why did you started the project together?

JvR: We met at Oliver Huntemann’s birthday party in Bremen and decided to work together. Then we fell in love, married, had children and made an album together.

7. “Monsters”, you new song it’s quite different from your first single (“Perfect”). Sometimes it reminds me a bit as if Björk meets Portishead. What do you think? Do you have a lot of nightmares ;-)?

JvR: As you can hear on my mixtape, I have a weakness for moody music. I have my melancholic moments, but I certainly sleep well at night. 😉
Besides, there are more nightmares happening in the real world than in my dreams.
Our song „Monsters“ is about that.

8. When you write a song do you start first for the lyrics or the music? How is the process of music producing with Mijk?

JvR: There are several methods: sometimes I have some lyrical fragments already in my little red text book, sometimes there is a rough playback that inspires me. When I work with Mijk, the ideas go round and round. I’m also adding sounds and melodies to the music, like on my two instrumental ambient albums „meer“ and „komische welt“, that I composed and produced all on my own. On each of them is also a collaboration with our dear friend Cosmic Baby.

9. Do you have the first album ready? Any news you can advance about it?

JvR: We’re in the final stages of finishing our debut album „of the undergrowth“, which shall be released on roter punkt this fall. It’s the kind of album we both always wanted to make: deep, dark, slow and gloomy.

10. If you have done a more dancefloor oriented mix which three tracks you would have included in it?