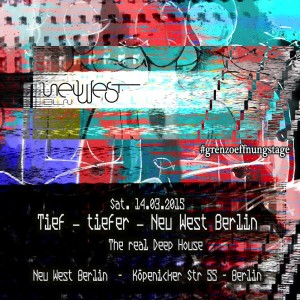 Nobody has the intention to celebrate a party. Nobody is us, Neu West Berlin. This Saturday March 14th we will dig our basement deeper with the deepest House music available in Germany. Deep House has almost become a four-letter word now, often mistaken for that blood-empty sound that is dubbed with that name. But real Deep House is so different from that.
Deep House is that soulful sound that lights up the stairway to heaven, the gold dust of true House Music, the most enchanted blackest bliss.
Neu West Berlin is happy to present three undisputed masters of German Deep House music  that truly live up to the high standards of the original sound of the underground;

Vincenzo has just released another masterpiece album on Anjunadeep.
His body of work on Dessous Recordings has already lifted him in the status of a true pioneer of Deep House music. “The Vanishing Years” will certainly grant him more well-deserved superstar status than ever before.
Oliver Marquardt aka DJ Jauche has been preaching the sound of Deep House in Berlin ever since. When todays so-called Deep House DJs where still playing Electro or Minimal or were just listening to the radio, Oliver raised the flag of true Deep House in his DJ sets and productions under such aliases like Jack Flash, Robin Masters Orchestra, Rockford Inc. and Machomovers.
His works on Sonar Kollektiv have finally put him on the international map. Like wine, he’s now better than ever.
René Breitbarth has made big impact with his DJ sets, over 100 releases and his very own label Deep Data. He will open the night at Neu West Berlin and warm the floor.
We just can’t wait for Saturday!
The event on Facebook.
The event on Resident Advisor. 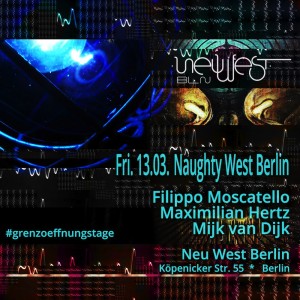 Already on Friday March 13th it’s time for the Italian Stallion to gallop though Neu West Berlin, drop loads of funky House tracks on the floor and make you wanna beg for more.
Damn right, you got it, Filippo Moscatello is in the House and he’s gonna make you an offer you can’t refuse. So you better get down to the sound of Neu West Berlin.
Maximilian Hertz is gonna heat it up fierce enough to let your horses run free.
And Mijk van Dijk will come for the rescue when the roof is on fire. We can’t let Neu West Berlin burn down to the ground just yet.
Nobody has the intention to close this location!
Warmup at studio r° floor from 22:00h with Nerk/Kirn (live) and Ryba (DJ Set).
Admission is free! Spread the news!
The event on Facebook.
The event on Resident Advisor.