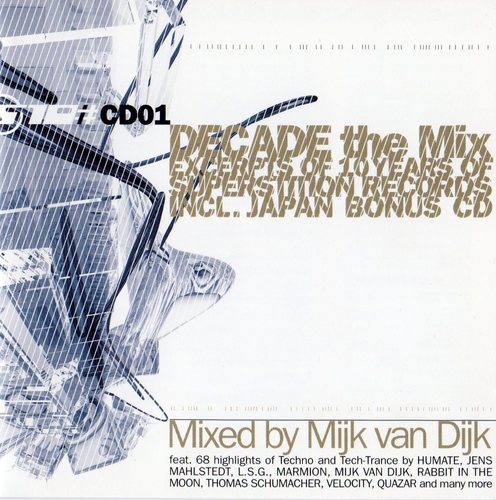 Superstition Records from Hamburg is celebrating their 10 years anniversary in grand style. Label head Tobias Lampe asked Mijk van Dijk to do a mix CD in a similar fashion like his  track “Super 100” of the 100th release compilation which was constructed only out of samples of the first 99 releases. Mijk used a very early version of the then brand-new music software Ableton Live and produced a new breed of mix CD, using loops, sounds and phrases of 68 songs of the whole Superstition back catalogue. Again he stressed, that he used only non-exclusive  stereo mix material and that everyone owning the Supersition back catalogue could have done this mix as well.
Around that time Richie Hawtin did his influential DE9: Closer To The Edit mix and 2manyDJs released their bastard pop landmark album As Heard On Radio Soulwax Part 2. Mijk’s Decade mix revisits the Superstition back catalogue in a similar way, but at that time was often mistaken as a DJ mix album with too many tracks.
For a proper track list, please check the Discogs page, for more information here are some contemporary interviews that Mijk did in 2003 about Decade – The Mix.

Decade is quite simply unlike all other mix cds. This 70 minute journey deep into techno and intelligent trance features an astounding 68 tracks; all from the Superstition back catalogue; and all creatively mixed by Mijk van Dijk.

With over 820 titles and 10 years in the industry, Superstition is a mainstay of dance music and this mix demonstrates the spirit of this history. Superstition has over the years been home to some of dance music’s most respected artists such as Rabbit In The Moon, Humate, L.S.G. and Thomas Schumacher and they all feature heavily, along with many others on Decade.

This is the type of mix that is an absolute must for those who enjoy the melodic yet harder side of techno. No review can really do this mix justice. It really is something that must be heard to be fully appreciated. That said, I will try to paint some kind of picture of what can expected.

Starting out with soaring synths and tribal techy percussion, the mix grabs your attention immediately. It proceeds to transcend effortlessly through slamming techno, tribal rhythms, sweeping pads, detailed intelligent melodies, classic vocals and even the hint of quirky electro in this constantly evolving mix. While being harder in nature, it never becomes too much or one dimensional and this is largely thanks to the variety of music used and the creative programming and mixing of Mijk van Dijk. One moment in the mix that deserves particular mention is about half way through Part 2 when the tribal rhythms and slamming kick give way to the absolutely outstanding Thomas Schumacher remix of Humate’s ‘Choose Life’. This kind of creativity and unexpected moments are typical of this fantastic mix.

For tech trance lovers this is sure to be an absolute pleasure. For those however looking at there first outing into techier sounds, this is probably a fantastic place to start. And for those looking for something creative and genuinely different, Decade is sure to please.

Decade the Mix: Excepts of 10 Years of Superstition Records is distributed through Stomp and will released in October.

Here’s an interview that Mijk van Dijk gave for Japanese REMIX magazine:
Remix: First of all,  congratulations on the 10th anniversary.  You’ve been having a close relation with Superstition for long time.  How you feel or think when you look back over the past 10 years?  I heard Superstition started to release the artist from Hamburg.  Do you think the label itself has been had big changes?  Would you tell me what/how it has been changed or what/how it has NOT been changed?
Mijk:  Superstition is truely one of those labels that reallly put its print on the history of Techno for 10 years. Not many labels have been as influential or if they were, are still around (like R & S-Records). It is true, it was started as a release platform for DJs from Hamburg and grew from a smalll idea to a big result. So many great inventions, visions or businesses have been based on a small idea, that has been fueled with strong passion, hard work and stoic belief.
Superstition became the Top 3-Label from Germany immediatley after only 7 releases especially through the EPs by Jens, Velocity and Marmion.
I don’t know what might have changed if we would have stuck with that formula of music, but owner Tobias Lampe wanted to explore new ground and released music from people as diverse as John Beltran, Oliver Lieb and one-off-projects, that have never been heard of again.

Remix: Following the above question: how do you think about the scene of  Techno for the past 10 years?
Mijk: 10 years ago, all the scene was still one. The music had differences in terms of hardness, softness, cheesyness and coolness. But all DJs could still have played on the same floor to the same people. Now, evverything has been diversified. This is necessary and unavoidable, when a movement grows. It’s also natural that everybody thinks, he is doing or dancing to the right music and that the other styles of electronic music are crap. The same happened with Rock Music. Sometimes people ask me, when Techno will finally die. It will never die, because it has infiltrated all kinds of other music already. There will be always Techno but it will sound different. Which was always the main point about Techno: not to stand still, always develop, always renew itself. Like the phoenix from the ashes.

Remix: Would you tell me the most important point for deejaying or making music for you?
Mijk: It is my job and also my passion. I can make a living by doing what I love.
I can totally express myself through it. I know exactly how to do it and I have developed a style and “language” of my own. I can reach other people and touch their heart and soul. I can give them joy and by this become a little part of their lives as well.  That’s so fantastic.

Remix: I heard you used the software call “LIVE” for this Mix CD.  I felt this whole Mix CD become one piece of composition.  This composition was created using a lot of songs (74) and the mixes and edits which cannot be created by turntable.  Please tell me more about the concept.
Mijk: I have been using Ableton Live already since version 1.0, but only as a loop creation device. With version 1.5 I started to learn the software inside out and discovered it’s futuristic features. Without Ableton Live the Decade Mix would not have been possible.

Remix: I heard this project was inspired by the track “Super 100” that yo produced for the 100th release of Superstition Records.
Mijk: Yes it was “Super 100”, the track for the compilation celebrating the 100th release of the label, which gave the inspiration for “Decade – The Mix”. “Super 100” was composed only out of samples from th first 99 Superstition releases. Label head Tobias Lampe liked the concept and asked me to create a mix like this in CD length. I wanted to give more space to the tracks, make them recognizable, sometimes only by their bassline or vocal hook, sometimes I wanted to use complete music but mix with a different beat. So the basic idea was always to compose a mix out of extracts instead of mixing a usual DJ-mix compilation. Something like a roller coaster ride through the label history. Deconstruct the muic and recconstruct it again to one cool long track of music full of memories. We inserted the 7 track IDs only later for the comfort of the listener. Basically it’s meant to be played in one go.

Remix: Though, you are the one of the highest technician of DJ playing, did you have any opposition to use LIVE?
Mijk: No, since I am a producer as well and I see “Decade – The Mix” more like a production than a DJ-mix.
I just loved the possibilities to create a perfect mix without the problem of matching speed and pitch of the tunes. Especially the complete freedom over the pitch of the track gave me the opportunity to create perfect harmonic mixes. Plus it was something that nobody has ever done before. Right now, I am using Live for many tasks like creating remixes or arranging my tunes which has been composed in Cubase VST.

Remix: Do you think the DJ playing using this kind of software will be increase in the near future?
Mijk: I do think that this is the first of a new breed of mix-CD, which gives the producer the complete freedom of expression and perfection and gives the consumer completely new listening experiences. The “classical” DJ-mix-CD will of course survive and be something similiar to a “Rock’n’Roll-Live-Album with all it’s energy and technical insufficiencies.

Remix:Are you also using LIVE on your DJ set
Mijk: No. I like to “Rock’n’Roll” at the decks!  🙂

Remix: The bonus CD is really nice present for listeners.  Did you mix this CD using LIVE, too?
Mijk: Sure!

Remix: The bonus CD is contained a lot of Japanese producers’ tracks. Were you conscious of Japan when you mixed this?  Would you let me know the concept of this?
Mijk: This bonus CD is a special gift for all Superstition fans in Japan. I only used tracks of Japanese interest, tracks and remixes by Toby Izui, Takkyu Ishino, Fumiya Tanaka, Thomas Schumacher and tracks by myself, which have been very popular in Japan. It will be only available in Japan.

Remix: You’ve been known as a sympathizer for Japan,  what do you like in Japan?
Mijk: First of all I have many dear friends in Tokyo.
Second, I like so many different aspects of your country: the friendliness of the people, the food, the anime-, manga-and video game culture, the weirdness of otakuism.
I am  interested in the Japanese history, which seems like a tale from a fantasy novel but it still noticeable in todays life, co-existing with the latest technology of the planet. I like the philosophical apporach to life in Japan, I guess I learned a lot for my own personality. And I just love to be in Japan.

Remix: Would you tell me your dream at this moment in time?
Mijk: Be No.1 in the J-Pop-charts with a very cool and catchy J-Pop-track!  😉