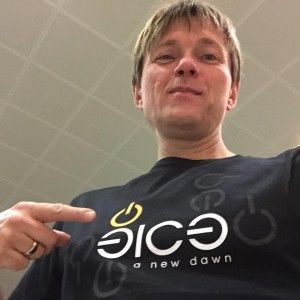 On Sunday December 28th I attended the 31C3 (31. Chaos Computer Club Congress) in Hamburg. My friend Daniel Domscheit-Berg showed me and my son kindly around and the whole experience was very impressing to say the least.
Today I watched 2 online presentations that I unfortunately missed.
The first was the keynote by Alec Empire ofAtari Teenage Riot fame, the second by Bill Scannell, a former NSA agent on his work at the NSA intelligence facility on top of Berlin’s Teufelsberg, a place surrounded by mysteries since I moved to Berlin in 1985.
I was particularly interested in Alec’s keynote since we have been working together at the rim of the early 90s, meeting to backup DAT recordings of each other productions (we only had one DAT recorder each) and I guess I even co-produced his very first release Unequal Chord as LX Empire. 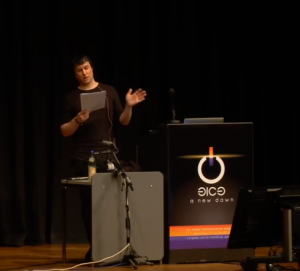 I liked the comment by Alec at 44:00 min. about the conformity in today’s music industry:
“Introverts have created some of the most important works in the history of mankind.
And introverts don’t fit into that system that has the goal to generate the most clicks in order to sell ads. The system favors those who come up with the loudest and most conformist content fast!”

I also feel that some of the most successful self-contained DJ/producers (and I’m not talking the league of super-high-paid DJs with extra staff here) are far better in their social media management than in terms of quality of music.

Another line of thought I followed was, that musicians are usually no hackers. We approach things from a different perspective. Of course one could say that Bob Dylan hacked the genre of American folk music or that Acid House producers hacked the factory-intended use of a TB-303.
But one can stretch comparisons just so much.

The goal however needs to be the multiple action of like-minded people with different tools to change the course of history which is still being controlled by a narrow-minded self-declared elite who needs to control the rest of us. If a member of this self-declared elite is reading this, please excuse me from excluding you from “us”, because you don’t want to belong, because you turn yourself against us, the people. 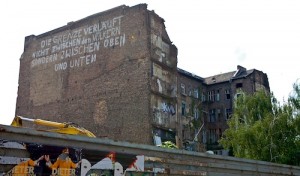 Back in the 70s, a popular slogan was that the frontiers between the people are not between East and West or North and South but between the rich and the poor. Today we can add: between those who want to control and those who are about to be controlled. We just don’t want that control happen against us anymore.

I never advocated violence and I am probably no good in the centre of a riot. (And no doubt about it – after watching all those Atari Teenage Riot music videos that Alec presented proudly during his keynote – that ATR’s music is the perfect soundtrack for riot videos. Intended, staged or authentic? You decide!).
But I’m not gonna let me kids let go into a world run and owned by corporations who have no mandate by the people but only an obligation to their share holders. I will raise my voice in my music and will give you my opinion in 2015.
It might not sound as riot-compatible as ATR, but the groove will be hopefully slightly more, erm… “groovy”. 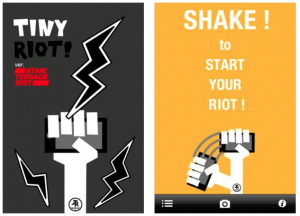 BTW: there’s even an iPhone app for your tiny riot at home or elsewhere, of course with ATR soundtrack.

So you can create your own little private tiny riot against whatever and wherever you may be. It was developed by Japanese ATR fans and as far as I know is pretty much unknown in Europe.
Very high nerd-factor!

And finally some some quick thoughts about Bill Scannell – Inside Field Station Berlin Teufelsberg.
His presentation is a stunning inside view into the belly of the beast, you may call it Cold War, NSA surveillance or just John LeCarre spy nostalgy. There’s something in it for everyone, no matter which perspective you might favor. 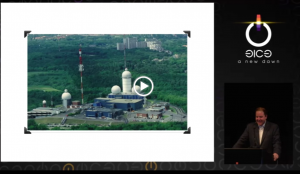 My line of thought to further consideration is:

“Perception changes with the times you live in.”

And finally some music! 😉