25 years ago, walls came tumbling down! 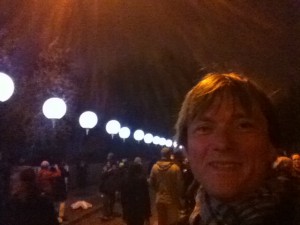 I moved to Westberlin in 1985 to study at the Freie Universiät Berlin (abbreviated FU Berlin, sic….).
Coming from a small town in Nether Saxony in the north of Germany,  Berlin was the total cultural opposite of life as I knew it before. I had just made my driver’s license, packed three moving boxes into my Citroën Visa and off I drove over the transit route through the GDR to Westberlin.
In those days, Westberlin was a haven for many who were looking for their personal freedom:
artists, who could afford the very low rents and would not have to comprise their work by a different job to maintain their life. Young men who would not want to go to the Westgerman army, because Westberlin men could not be drafted due to Western allied laws. Punks and Gays who would embrace the liberty in districts like Kreuzberg and Schöneberg. And basically everybody interested in underground nightlife, since Westberlin was the place for that – ironically not in spite but because it was surrounded by a wall.
When I arrived here however, it felt a bit like the party was already over: the Neue Deutsche Welle (NDW) was dead, Punk did not look and sound exciting anymore, David Bowie and Iggy Pop had left the building as well.
What you had were clubs and bars like Dschungel, Krik, Cri Du Chat or Risiko, which fostered the Berlin nightlife. To catch a glimpse of those years, check out this special Berlin episode of the English TV program The Tube with rare appearances and performances by Die Einstürzenden Neubauten, Die Ärzte, Die Toten Hosen, Die Puhdys, Jessica, Monika Dietl, Elvis Costello, Christiane F., Mark Reeder. The feature on Risiko Bar starts at 34:40 min.

Only years later I would realize that I just came “too early” for the party which would be Acid House, Techno and of course the opening of the wall. I wrote a German article for SPON about those early years a couple of years ago. And just today, Felix Denk, co-author of the Der Klang der Familie book (now also in English!) has written a brilliant article about Berlin Techno in the year of 1990. German language only, BUT with a great DJ set by Tanith from Tresor Club for all you non-German speakers. 😉 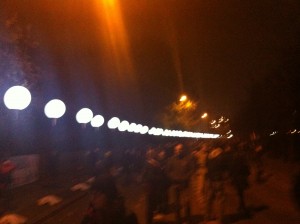 While it felt completely normal living in the shadow of the Berlin wall, because it already existed, when I was born, I was wondering often, how grand life could be in a reunited Berlin, without this wall separating the two parts of the city. As a Westberliner I was allowed to travel into Eastberlin (of course it was not possible the other way around) and made friends there, that I would hang out with. Often I was standing at the wall at the Bethaniendamm, looking over to the house on the Eastern side, wondering how those people over there lived and loved. And now, a friend of mine has an apartment in one of these houses and today we watched the Berlin Wall Balloon installation right at that place that I used to contemplate over a future without the wall. This was a  very emotional highlight for me. And I liked the way Berlin celebrated this: in other countries you would have your military parades with tanks, soldiers and missiles or national flags all over the place or any other means to display power. Berlin silently and poetically sent fragile white balloons into the night sky. 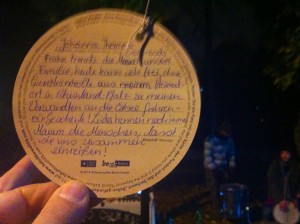 Also I was sending a thought to a friend who is taking part in a totally different campaign: he is travelling with 100 members of the Zentrum für politische Schönheit (Center for political beauty) to the outer borders of the EU to remove the walls around the European heartland and to refer to the fact, that 25 years after the opening of the innergerman wall, we are still surrounded by walls and that people are dying at these walls, because they are striving for a better life, like every man and woman does.

Or to put it in the words, that I chose for my track Home on my Afreuropamericasiaustralica album: 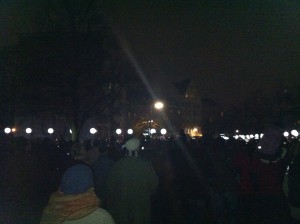 In the liner notes I added:  Just accept that this is valid for everyone.
And like I wrote in the liner notes for the track  The Gap from the same album:
“Each man struggles for a good life. Man will go beyond the final frontiers to achieve this goal. For a starving family their final frontier may be your country. “

I hope the celebration of the fall of the wall will not only be a backward-looking nostalgic event, but also will make people aware that there are still many walls to tumble down: the walls in our hearts, in our heads and those physical walls dividing people, may they be between North-and-Sounth Korea, between the Israeli and the Palestine people or surrounding Europe.

P.S.: please excuse the poor quality of my personal iPhone photos.
I am sure that you can find much better photographs  and videos everywhere on the web.